The Port Fairy to Warrnambool Rail Trail follows an old passenger and freight railway that operated as a whole from 1890 to 1977. It closed in stages and eventually became truncated for passenger trains at Warrnambool, while some infrequent specialised freight services continued to operate along other sections of the track until 2002. The Rail Trail was created by the Friends of the Port Fairy – Warrnambool Rail Trail who have done an incredible job at improving and maintaining this facility. This was one of the best rail trails out of the many that I have ridden and much of the credit has to go to this volunteer organisation for making it happen.

We caught the first train out of Melbourne to Warrnambool Station, departing Melbourne at 07:00am. The total travel time of 3 hours and 47 minutes is what amounts to a pleasant journey through the countryside. Thankfully, it was a relatively empty train which allowed our bikes plenty of room in the rear luggage area. There were several other cyclists on board who alighted at various other stops along the way with rail trails, such as Camperdown.

It was a wet, windy and cold day at first. It eventually cleared soon after our arrival and we had a nice day looking around before embarking on the bicycle trip on the next day. 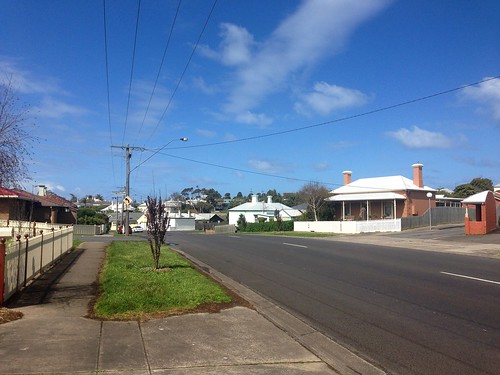 This part of the world has some of the most beautiful sections of coastline in Australia. Middle Island and the coastal flats nearby are a haven for birds and marine life which are all immediately obvious when walking along the coastal trails south of Warrnambool’s CBD. 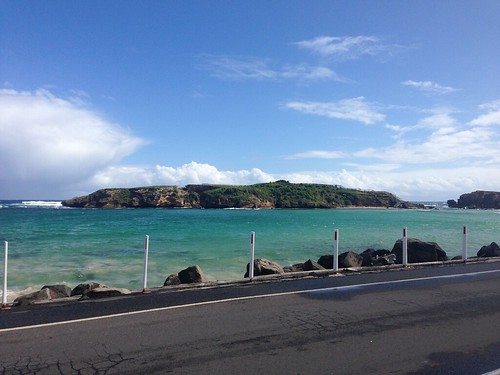 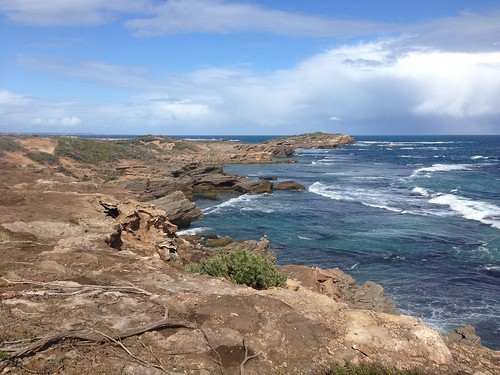 We set off soon after 7am the next day and head into town to find some breakfast. Luckily there was a bakery that was open on the day of AFL Grand Final along our route through town. Egg and bacon rolls might not be the healthiest choice, but it may be the most delicious and warming way to start a ride on a cold and wet morning.

The first section of trail follows the Merri River into a large area of wetlands and coastal flats. The scenery here is absolutely beautiful and well worth a visit in its own right. There were hundreds of birds nesting, paddling or flying around here which provided a scenic environment while we were thoroughly drenched by the on-and-off rain. 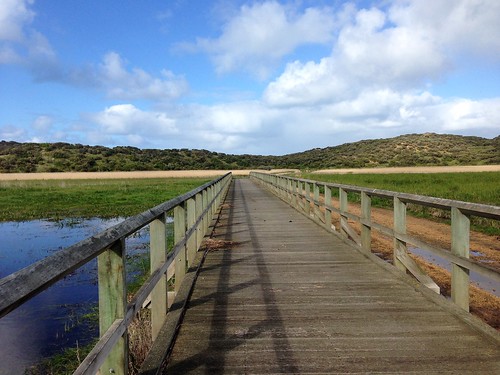 But it soon cleared and we continued north-west along the old railway alignment. While it has been well and truly picked clean of most infrastructure, you can still find remnants if you look hard enough. This includes old track, mile markers and station cuttings. 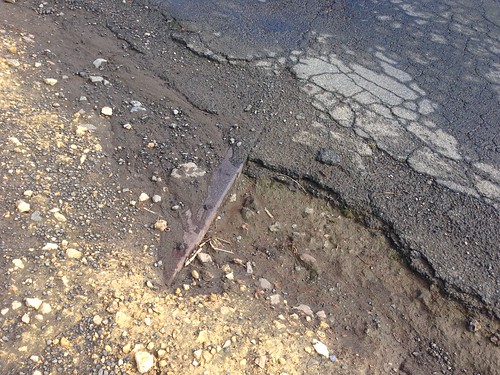 For one, the old station sites were very visible. The platform signs have been restored and placed in their original locations which is a very nice touch. 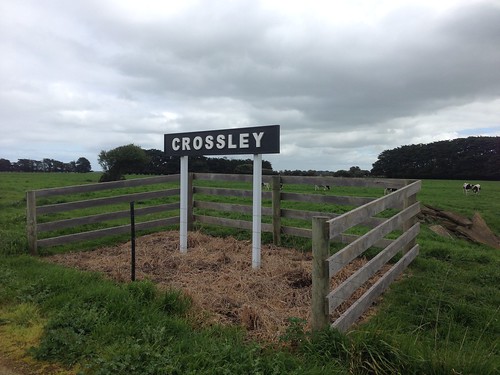 After a fair bit of riding we came to the town of Koroit. The first thing that I noticed was the smell of the Bega cheese factory that lies on its outskirts. You wouldn’t think that a cheese factory would smell particularly nice, but to me it was almost like I could eat the air (I had cravings to eat cheese for the rest of the day…)

A little further along was the beautifully-restored Koroit Station. The building has been renovated and the surroundings turned into a great park area with a playground, some benches and a picnic site. 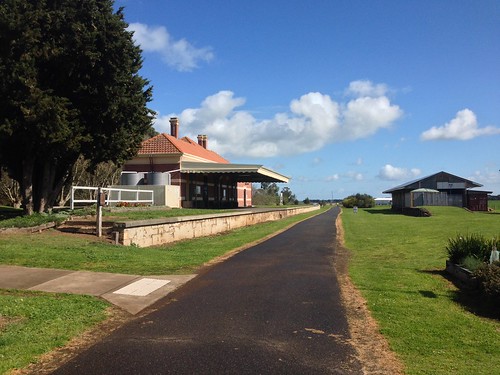 For the gunzels, there is an old timetable on the platform which shows the stopping patterns of the trains that used to run along this section of railway and a whole host of ghost lines and stations that no longer exist like Rosebrook and Weerite. 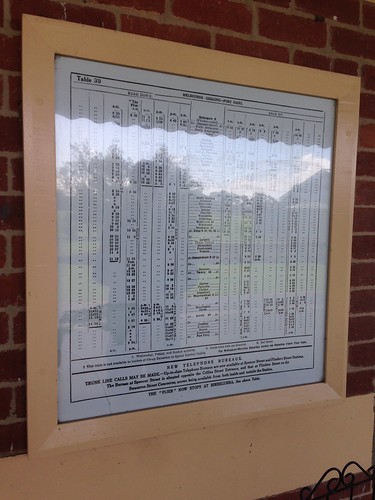 We were about an hour ahead of schedule and decided to take a short side trip to Tower Hill, just north of Koroit. On the map, the area was shaped like a mediaeval castle in the middle of a vast lake. It turned out to be an extinct volcano, and it is one of the most stunning geographic features that I’ve seen anywhere in Victoria. Unfortunately we didn’t have time to go into the park itself, but the view from the lookout was very inviting.

The next section from Koroit to Port Fairy should have been easier than the first on account of the fact that it is all downhill.

However, strong headwinds made this quite a slog through relatively monotonous countryside and semi-curious cows. Surprisingly, we were only swooped by magpies 4-5 times in spite of the large numbers that we saw. Many seemed to be kept busy by territorial battles with other magpies and wattlebirds.

Arriving in Port Fairy was quite a spectacle as there was a craft market right in the middle of the trail’s end. Despite being intruiged by the rather ambitiously-named “World’s Best Sausage Rolls” stall, we continued into town to find lunch. 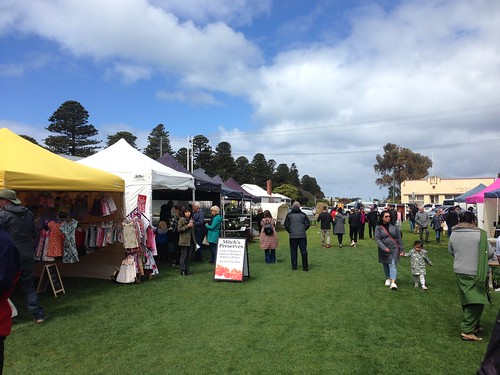 After lunch we had time to explore the town a little and found some nice heritage buildings along quiet tree-lined streets. 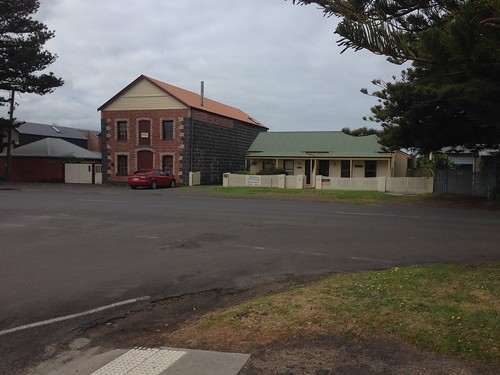 We also did the requisite gunzelling and found this odd situation where a bus stop had two separate poles with one sign on each and blocked the other’s view. 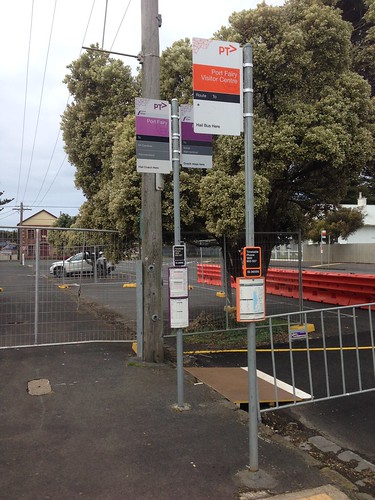 The ride back was fairly uneventful (other than being swooped again by the same magpies and a short but hairy ride along the Princes Highway on the western outskirts of Warrnabool).

As mentioned in the introduction, the Friends of the Port Fairy – Warrnambool Rail Trail deserve a lot of praise for their hard work which is very visible along the whole trail.

One of the best parts of this trip was finally learning how to reliably spell Warrnambool. This is something that has evaded me for years and will make any future typos all the more embarassing.