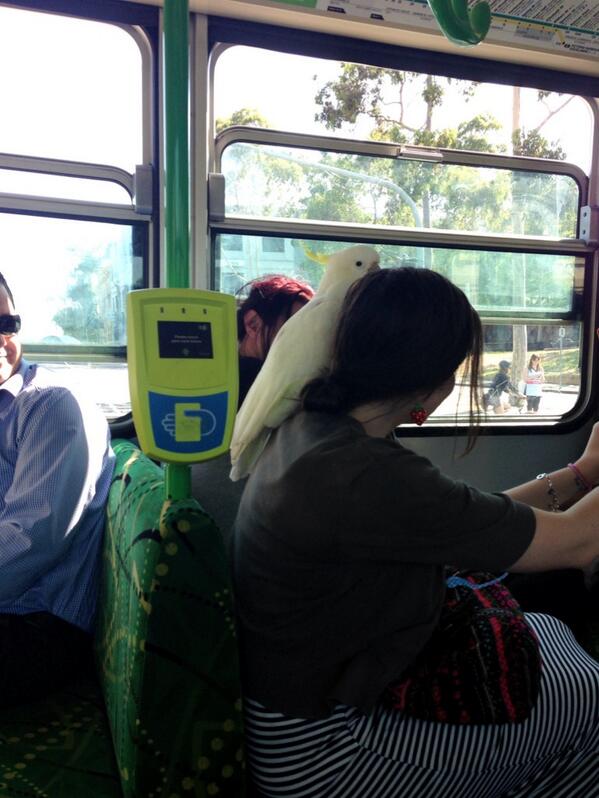 Anyone who takes public transport has their own weird and wonderful stories about things they have seen. In keeping with that spirit, I would like to share some of my experiences over my years of catching trains, trams and buses in Melbourne.

Cockatoos on a tram

I was on a 48 tram heading into the city when a man boarded the tram in Richmond with his tame cockatoo. Nobody seemed to really notice until the cockatoo started to get a bit restless and started making some noise.

It then started hopping around, testing out people’s shoulders for levels of comfort. The bird was very friendly and enjoyed looking out the window at passing trees.

During one trip, there was a route diversion from Johnston Street. The bus driver was trying to make his way onto Lygon Street but got lost in the maze of Fitzroy’s side streets. He must have been a new driver, at least to the route, because he couldn’t find the right way back.

When it became apparent to the passengers that he was going the wrong way, a couple of us got out of our seats and helped him find the way back. He was very apologetic but nobody minded. Everyone thanked him as they disembarked later.

Speaking of Johnston Street buses, there was an ongoing interesting occurrence on the 203 when it was still around.

Before the 2014 service changes, there were five different bus routes along Johnston Street (200, 201, 203, 205, 207). All of them went along Studley Park Road to Kew Junction except for the 203 which turned left at Hoddle Street and ran express down the Eastern Freeway to the Chandler Highway.

Almost every time I caught this bus on my way home and it turned into Hoddle Street, there would be at least one person who would notice this and frantically get up and press the stop button and/or walk to the front and ask the driver where the bus was going. Some would get unjustifiably angry (which is never an acceptabled response), but most just accepted their fate and glumly sat back down.

During a delay approaching Flinders Street Station on the Lilydale Line, we had been stationary outside our platform for at least 3-4 minutes.

The train driver had been giving us what updates he could. But as this was taking some time he decided to offer some more useful information over the train’s PA system. I don’t know where he got them from but he started reading recipes for different dishes and drinks.

The first one I think was for a chocolate milkshake and I can’t remember the rest, but it definitely made the disruption more interesting than usual.

I was waiting a the bus stop on a Sunday morning at Victoria Park Station in Abbotsford during one of my interchanges onto the 207 bus.

While I was standing there watching the traffic go by (a pastime that’s an acquired taste, mainly among transport planners), three elderly women entirely dressed in black approached the stop. They began inspecting the timetable and speaking in Greek, trying to work out when their bus was arriving.

Then one of them turned to me and asked in very heavily-accented English if I knew when the next bus would come. I checked the PTV app on my phone and replied in Greek that it would here in a few minutes.

Her eyes lit up and exclaimed to her friends that there was someone who could help and spoke Greek. And so began about a 10 minute conversation with them, both waiting for and on board the bus. This was in April just before Greek Easter and they had been to church for their morning service.

They got off the bus just before it entered Kew (a lot of Greeks still live in Collingwood and Abbotsford, although not as many as there used to be). Unfortunately for me, I made a pretty bad slip up.

For Greek Easter, in the days leading up to the big day of Easter Sunday, you say ‘Καλό Πάσχα’ (Happy Easter). A couple of days before Easter Sunday, you can say ‘Καλή Ανάσταση’ (Happy Resurrection). You are only supposed to say ‘Χριστός Ανέστη’ (Christ is Risen) on Easter Sunday itself.

It was at least a week before Easter Sunday but I said ‘Χριστός Ανέστη’ to them as they left the bus. They kept saying ‘Καλό Πάσχα’ back to me but I didn’t get the hint until later that day when the penny dropped.

A slightly long and marginally relevant tangent but there you go. It was nice to have a chat with some random people in Greek. It’s not something that happens every day.

And of course, who could forget Bruce the friendly tram driver? He’s well known to regular passengers on the Kew Depot routes (48 and 109) but apparently he’s also been driving on others recently as well.

I remember speaking to him a couple of times or otherwise being a passenger on one of his trams, which were always interesting experiences. Once he sang Happy Birthday to You over the tram intercom after overhearing someone mention that it was their birthday. And then there’s his regular jokes about the “world’s longest tram platform” at Jolimont Station and about Richmond supporters as he enters Bridge Road.