We caught the first train out of Melbourne and arrived in Bendigo just after 10am. It had been a very long time since I visited the city but there was unfortunately no time to have a proper look around.

The Trail proper begins about 2 kilometres north-east of Bendigo Station, which is accessible by either local streets or a less direct shared path that follows a creek/drain. Both routes take you past the entrance to the Bendigo Tram Depot where a lovely old W-class tram was taking a nap. 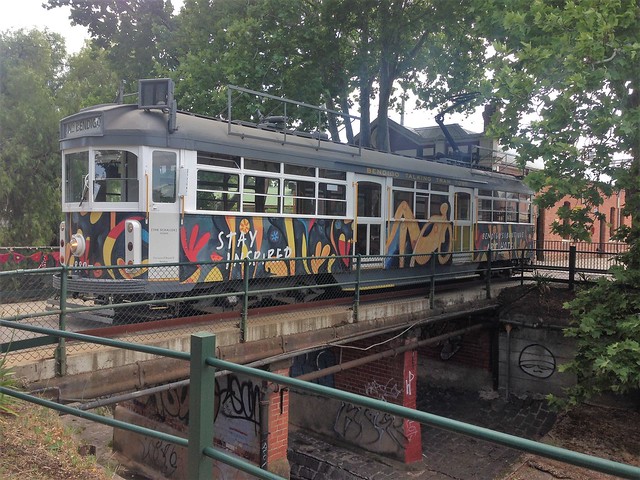 Following the Trail from here takes you through an industrial area of Bendigo. This features an interesting combination of abandoned warehouses and operational light industrial facilities. There was something resembling some sort of disused school, but I can’t confirm this.

A little further on is the locality of Strathfieldsaye. This seems like a rather odd name, and apparently it comes from the name of a mansion in England that is home to the Duke of Wellington. 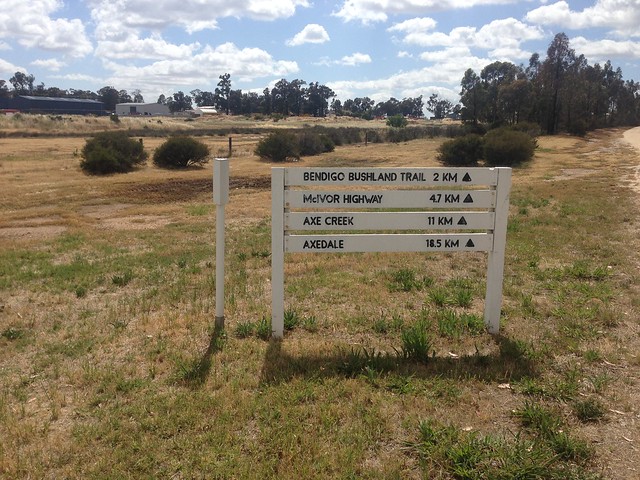 One of the best features of this trail is the signage. Having read the comments from some previous users I was preparing to do a lot of map checking. However, we had very few issues with directions along the entire ride in both directions. There were identifying totems located at intersections and some cute level crossing signs that had been repurposed with the name of the trail inscribed on the front. 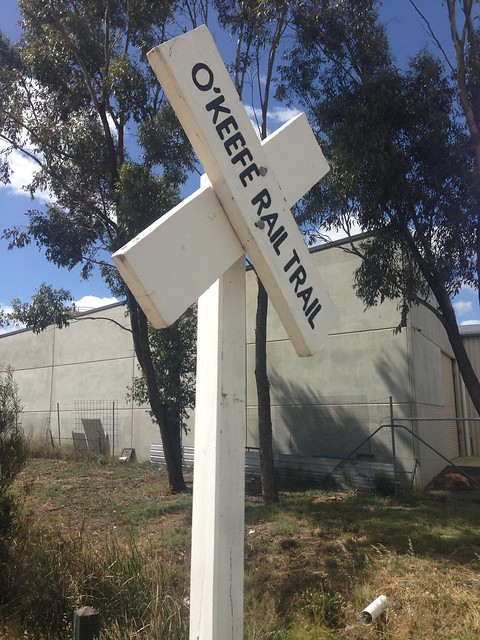 As with most rail trails in Victoria, old station sites have been restored and maintained over many years. Axedale Station is one example, where an old VR wagon has been placed on an old piece of track. While it was operational, this line carried both passengers and goods, so it is nice to see some history being preserved and exhibited. 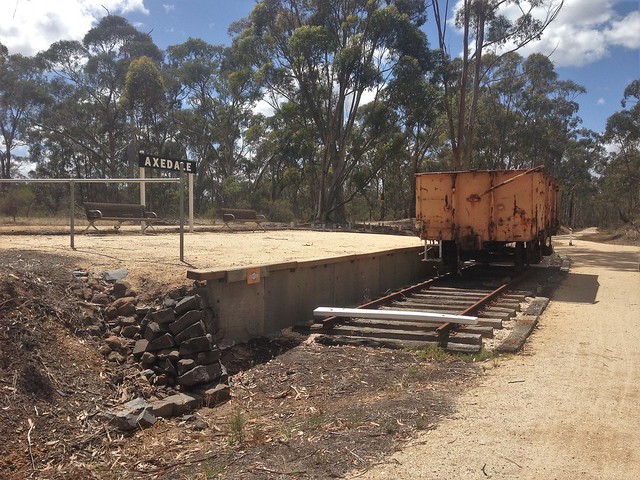 Axedale was the logical place to stop for lunch. It is the approximate halfway point and has a very good pub. The town also has a scattering of heritage buildings, including a church built from local bluestone and public hall. 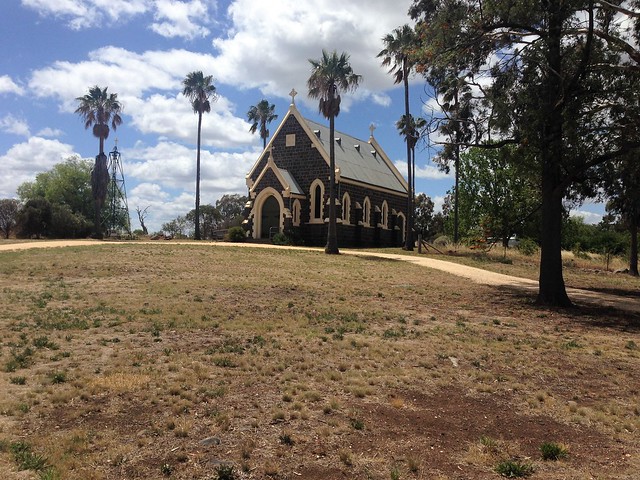 The food at the Axedale Tavern was very nice and the service prompt and friendly. If you are using the trail or driving through, it is a good place to stop and rest.

Due to development that occured between the closure of the railway and the opening of the path, the Trail has to divert away from the original route of the tracks for a few kilometres. 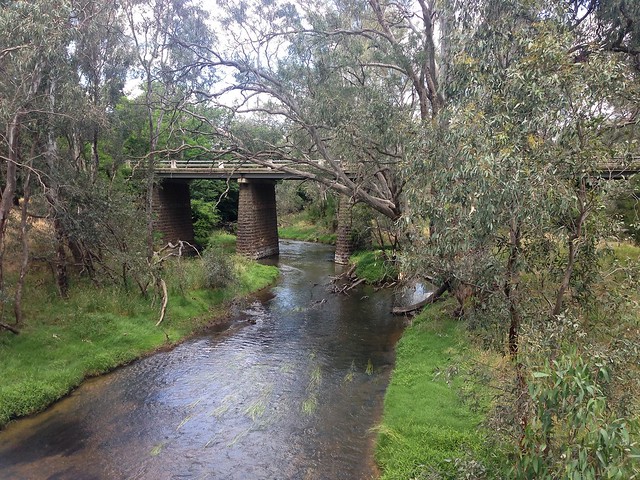 It also takes you past the remains of the Quarry Hotel which overlooks the eastern bank of the River. Built in the 1870s, it is quite run down at the moment, but it was constructed primarily to service a nearby bluestone quarry that may have provided material for kerbing on St Kilda Road in Melbourne. 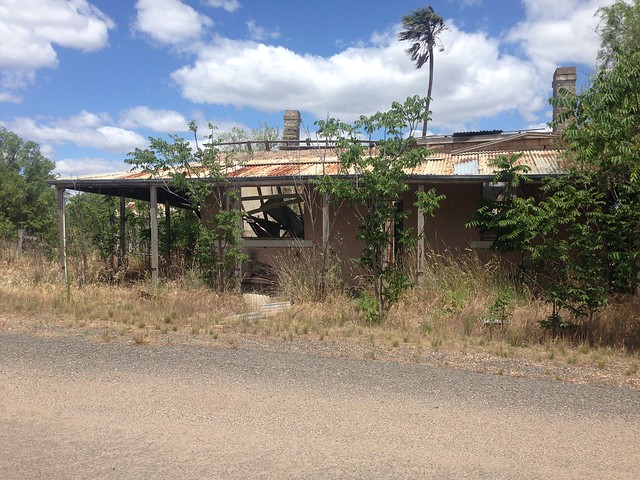 Past Knowsley, there are about 12 metal cattle grids on the path. They are well-signed, but be aware of them and don’t try to ride too quickly or slowly over them. I can imagine that they are pretty treacherous in wet weather, especially if you have narrower tyres.

Just past the grids and about nine kilometres out from Heathcote, the path brushes along the north-eastern shore of Lake Eppalock. This is the artificial lake created to supply Bendigo and surrounding areas with water. It is also the only major water storage facility in the catchment of the Campaspe River. It has only been full once in 1996, and when we rode past it looked a long way away from being at capacity.

After a little more riding, we reached Heathcote. The town’s layout is a little odd, as its town centre is very linear and spread thinly along the McIvor Highway that runs through its centre. Being gazetted as a town in 1851, there are lots of old buildings that have been restored and well-maintained. 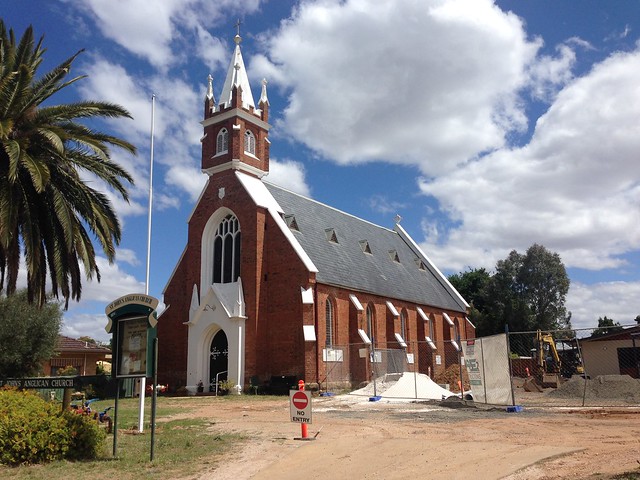 The ride back from Heathcote was a little more hurried as we had to rush to catch the second last train back to Melbourne (the last one was two hours later), and a badly-timed flat tyre about 6 kilometres out from Bendigo.

We made it (with six minutes to spare) and arrived back in Melbourne in time for a late dinner. Plus, we were treated to a beautiful sunset and this view from the rear of the train. 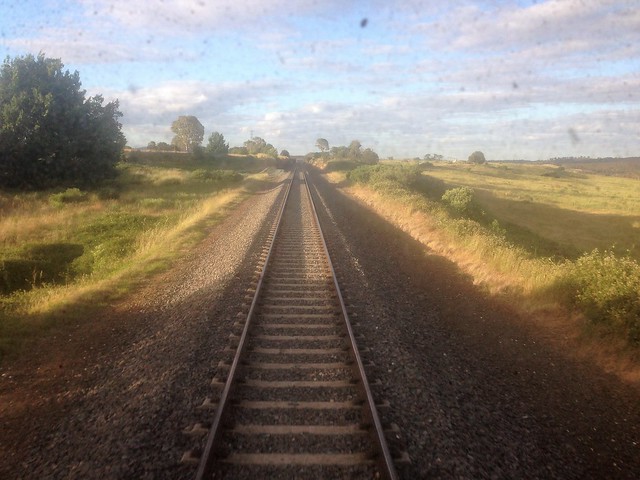 This was one of my favourite trips so far. The Trail is one of the flattest that I have ridden and is very gradual in its descents in climbs (with the exception of the Campaspe River). This makes the round trip of approximately 106 kilometres quite doable as a day trip. Unlike some other trails, the scenery was rarely monotonous or boring and the trail surface was consistently good for all but about 800 metres of the 49 kilometre-long trail.

There are plans to extend the Trail to Heathcote Junction to complete the abandoned railway, or even as far as Wallan. This would make a great project and make it possible to ride from one railway line to another – something that is not possible on any other rail trail in regional Victoria – and make it even more attractive for visitors and tourists like ourselves.

[…] rich railway history. I’ve written before about some of these, for example the O’Keefe Rail Trail on the Bendigo – Heathcote Line and the Gippsland Plains Rail Trail from Stratford to […]