The removal of the level crossings at Surrey Hills and Mont Albert in Melbourne’s east was announced last month as part of the 2018 state election campaign. These two projects will eliminate the last road level crossings on the Belgrave/Lilydale Line between Flinders Street and Ringwood.

As Marcus Wong has written before, these level crossings have remained despite previous proposals for their elimination in the 1970s. 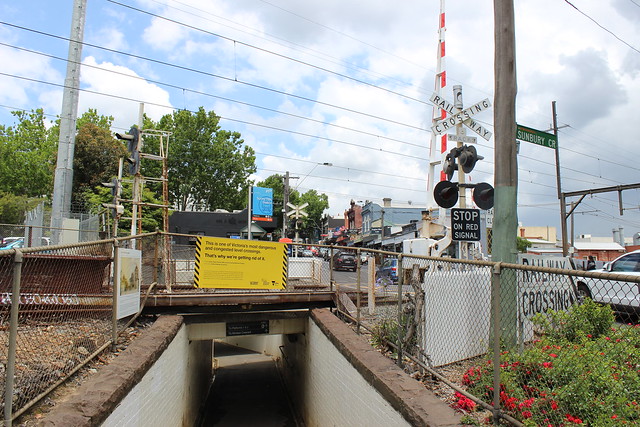 Living in North Balwyn without a direct train line means that these are the closest things that I have to a ‘local’ level crossing removal. Spending my childhood in this area means that I have fond memories of both the Union Road and Hamilton Street shops (Breadstreet anyone?) and many years of travelling on various modes through and into the neighbourhood. This should explain my particular interest in these two projects.

The LXRA has already indicated a preference for rail under road solutions at both level crossings. This is before any detailed technical investigations or plans have been done and have yet to be confirmed. However, the characteristics of the area would probably suggest this type of design anyway.

Grades on this section of track are generally a constant uphill climb from Canterbury Station through Chatham, Surrey Hills and Mont Albert Stations. The track then levels out after Mont Albert and descends into the underground station at Box Hill.

We can work out the possible start and end points for the trench by looking at this diagram and the current features of the area. 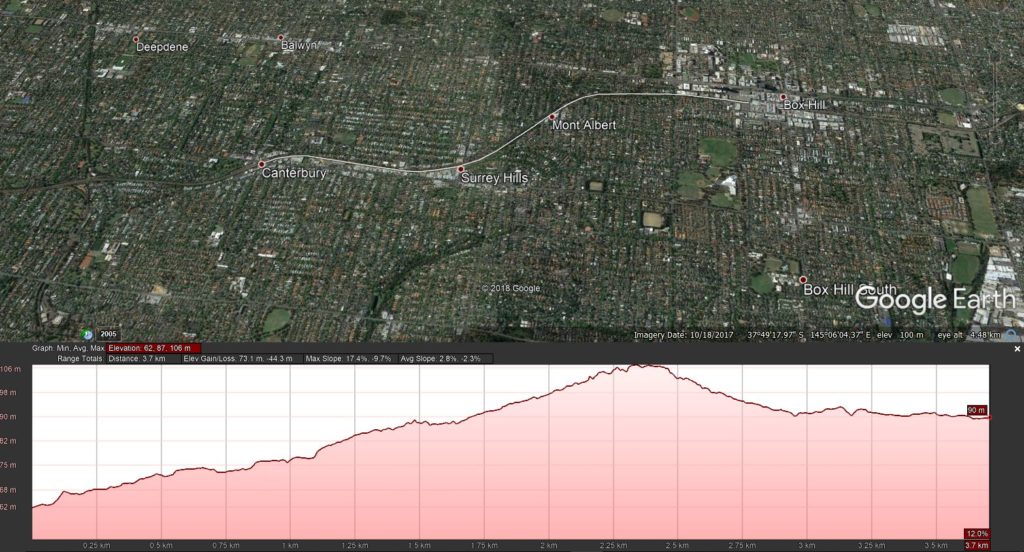 For the possible trench entrance, there is a current road underpass Robinson Road off Canterbury Road that allows access under the tracks for vehicles (not pedestrians). The distance between this underpass and the Union Road level crossing is 367 metres with an elevation gain of 11 metres. This seems sufficient room to have only a slight downward trajectory for a new track through the trench, if any at all. 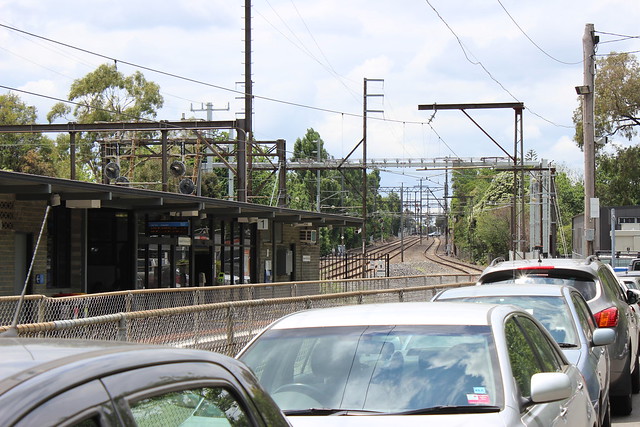 It would then be a steady climb up to Mont Albert Station from Surrey Hills. 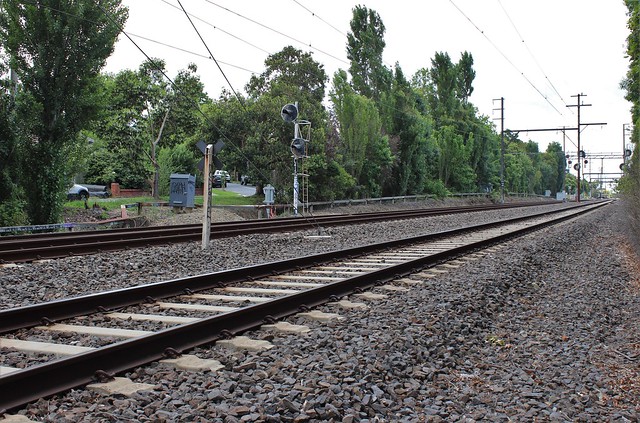 The point at which the gradient levels out before Box Hill is just before the Creswick Lane underpass west of Elgar Road. This would seem the logical point for the trench to return to the present track to avoid having to rebuild or reconfigure the rail bridge over Elgar Road.

Being a Boroondara local and familiar with the area, I had a look around yesterday to document the area before any works begin.

The first thing to note is that I spent a total of about 6-7 minutes around the Union Road level crossing. Even in that short space of time, no fewer than three vehicles stopped over the tracks at three different times. It seems that some people have very short memories.

Both stations have quaint shopping strips nearby, Union Road being a larger centre with a new Coles supermarket. Mont Albert also has the distinction of hosting the Railfan shop! 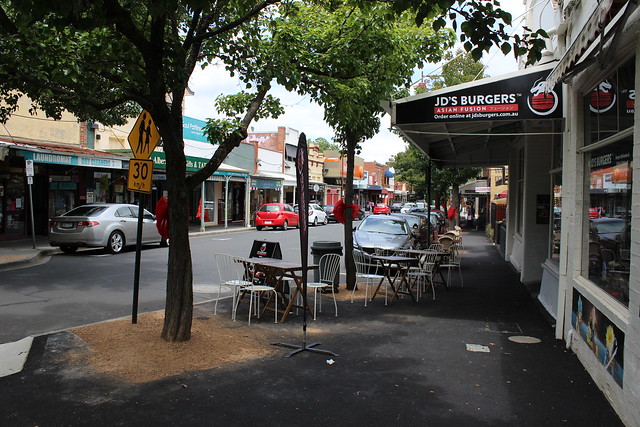 Both suburbs are very pleasant to visit and walk around. I can highly recommend a route from Canterbury Station up through to Box Hill along the railway line if you want to have a look at the neighbourhood. There are lots of leafy streets, historic houses and hidden parks along the way.

What are the main challenges?

While the geography might be somewhat more straightforward than some other level crossings around Melbourne, there are some complicating factors that will need to be considered.

The station buildings at Surrey Hills are not heritage listed, nor is the land subject to any planning scheme overlays. However, there is a Floodway Overlay just north of the station along Bedford Avenue. Such a constraint has not stopped recent level crossing removals from having rail under road in areas subject to flooding, but it will be something that will have to be dealt with in both the trench and station designs.

There was a heritage study of the area completed in 2011 for Boroondara Council which led to the creation of a Heritage Overlay (HO532) over the shopping centre. However, this specifically excluded the railway line, level crossing and station area due to their reconfiguration and modification during the addition of the third track in the 1970s.

However, Mont Albert Station is included in a heritage overlay (HO27 in the Whitehorse Planning Scheme). While it is not listed in the Victorian Heritage Register, these planning controls may present some difficulties. Built in 1910-1911, it is a very quaint and attractive feature. It is also the oldest railway building in the City of Whitehorse. 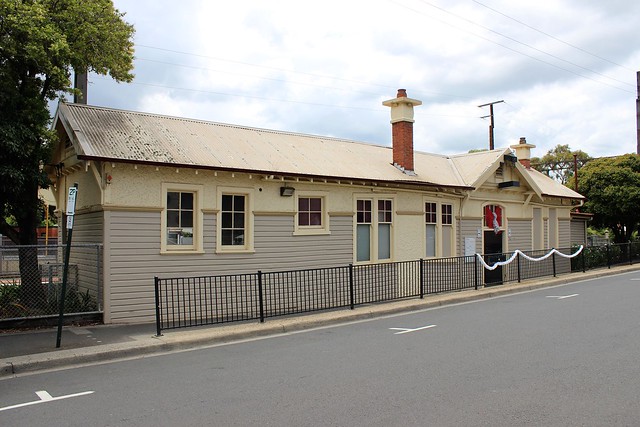 Hopefully it can be retained given its location to the side of the station platforms.

Another challenge will be increased traffic on both roads – particularly on Union Road. Ancedotally I am aware of many people who will avoid Union Road specifically because of the level crossing. When it is gone, it is not unreasonable to expect increased traffic volumes as cars are able to move more freely through the local shopping centre. This is something that will have to be managed by the appropriate authorities when the time comes.

One final issue that springs to mind is the significant amount of mature vegetation that directly abuts the rail reserve. Much of what makes Surrey Hills and Mont Albert such pleasant places is the generous and thick tree cover along local streets and roads. Presumably there will be at least some vegetation that will have to be removed as part of the works. Making sure that this does not significantly detract from the local landscape will be an interesting challenge for the LXRA to manage. 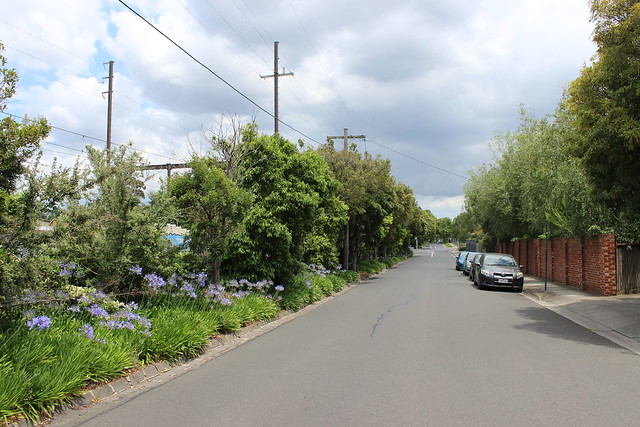 This is not an exhaustive list by any means. I am sure that other issues will emerge and be considered once the design process commences.

Does this remove all level crossings on the Belgrave/Lilydale Lines?

The LXRA, in their factsheet, claim:

This is not actually correct.

I alluded to this point in the introduction to this post. There is still one more level crossing between Flinders Street and Ringwood that will remain: the pedestrian level crossing at Bank Street/Rutland Road in Box Hill.

If you would like to see more photos, I have set up a Flickr album from my site visit here.

“Presumably there will be at least some vegetation that will have to be removed as part of the work” – in the case of Blackburn a short distance down the line, they chopped down virtually everything:

I am a local and also the barrister who represented the Residents group in the Supreme Court action against the construction of the sky on the Caulfield line.

I’ve already seen that the installation of the tunnel at Mont Albert will result in the destruction & removal of the existing Mont Albert station & all the existing vegetation will be removed.

In replacing the station they will most likely use it as an opportunity to change the planning overlay which allows for the construction of high rise developments around the station – which is what they did at Murrumbeena & surrounding stations.

I think it is terribly sad day for Mont Albert village.

Yes, the level crossing needs to be removed but don’t have any misplaced illusions that the State Government will pay any heed to local character or concerns.

Karen Strozyckireply
– In reply to: Philip B. Hayes

The community wants a say in what happens to ‘their’ local community? It’s a sad fact that as our population increases, it becomes unrealistic to expect that your local community stays the same for your benefit but to the detriment of everyone else. I live in Box Hill – it’s not the same as it was when I was younger. Our quaint little station was removed years ago for everyone else’s convenience. High rise buildings are under construction, and ugly townhouses are being built where lovely old period homes once stood. However, what I remember is also a far cry from how my mother remembers it from the 1940s, which was also a far cry from its early agricultural roots. That, sadly, is the price of progress. It’s extraordinarily selfish for residents to expect their little pocket of paradise to stay the same forever while enjoying the fruits of progress elsewhere. NIMBYism is alive and well in more ‘affluent’ suburbs where residents think their wants outweigh the wider community’s needs.