There are several hundred rules and regulations governing what is permitted and prohibited on Victoria’s streets, roads and paths.

The large majority of these are covered by the Road Safety Road Rules 2017 and Road Management Act 2004.

Despite driving tests, public education campaigns and the fact that being out on our streets and roads is something that most people do every day, there are many that are poorly obeyed or misunderstood entirely. Here are six of these that I think are among the most commonly ignored or misunderstood.

1. You don’t always have to cross a street at a designated pedestrian crossing

Many people seem to think that it is not legal to cross a road or street except at a designated crossing. This is most definitely not the case in Victoria.

You are able to cross a road or street where there is no designated crossing, so long as you:

There are a few other more specific requirements for crossing that you can read here.

A good way to work out the 20 metre distance is to visualise a D1-class tram, which is almost exactly 20 metres long. 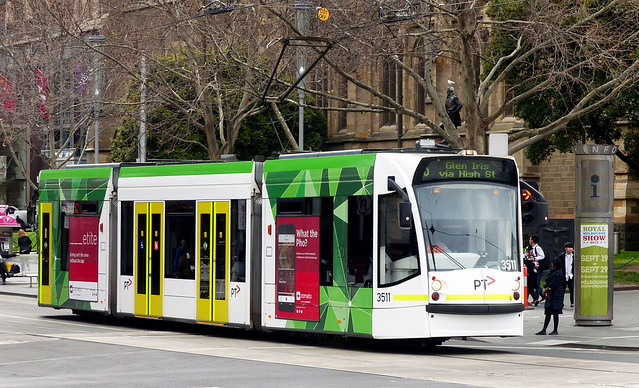 If you are interested in the details, there are many people who have already detailed the history of jaywalking and its invention (examples here and here).

2. Vehicles must not turn across tram tracks bounded by double yellow lines or raised dividers

This one is dedicated to my fellow passengers on the route 48 tram travelling down Bridge Road.

With the largest tram network in the world, Melbourne has many locations where “tramways” have been installed and designated. These are marked by either double yellow lines or raised divider strips. 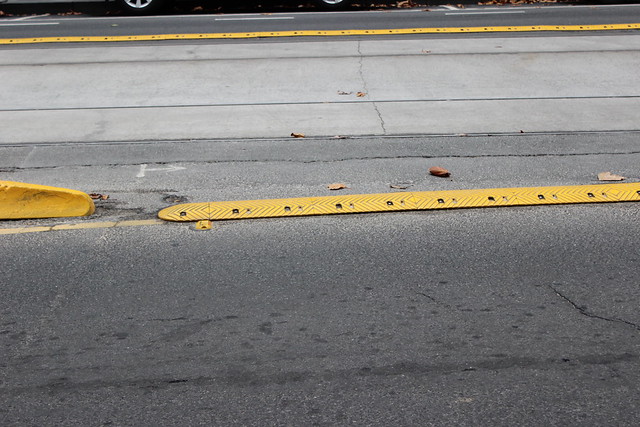 Back to the 48 tram, most times that I travel along Bridge Road there is at least one motorist who drives in front of the tram over these dividers causing either vigorous dinging or emergency braking (or both).

3. Vehicles must give way to pedestrians crossing in a slip lane

I would nominate this one for the prize of least-followed road rule in Victoria.

If you are driving or riding a vehicle entering any slip lane, you must give way to pedestrians crossing. 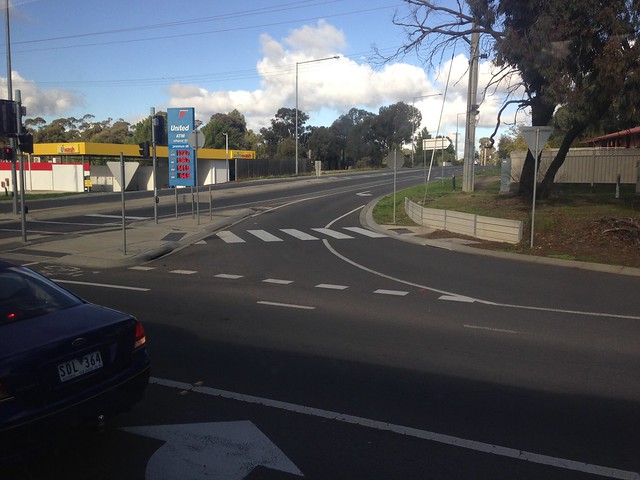 This rule is probably made confusing by the fact that many slip lanes in Victorian have zebra or other crossings that explicitly give the right of way to people walking, wheeling or riding across the road. This may lead people to believe that they do not have to give way at other slip lanes where there are no markings.

4. Vehicles must give way to turning buses

As I dedicated a previous section to my fellow 48 tram passengers, I will refer in this one to those who also frequent the 200/207 bus down Johnston Street.

In short, if you are in a built-up area and a bus is turning out from the kerb (e.g. from a bus stop), you must give way. Even if it is an indented kerb. 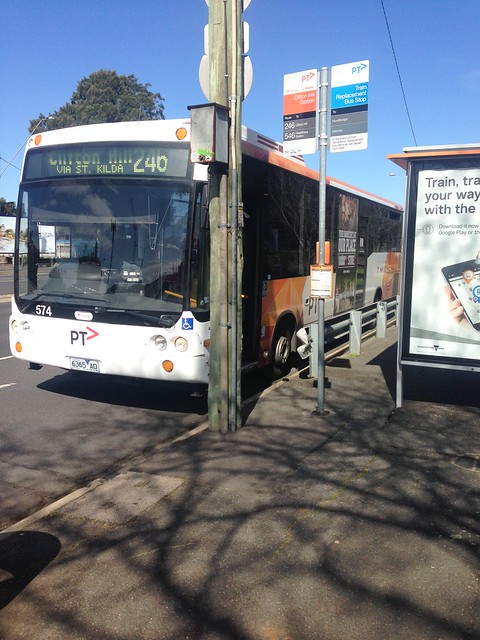 This is regardless of whether they are turning into a bus lane or not. If you see a bus by the side of the road, keep an eye out for its indicator.

Unless otherwise signed, you are not permitted to park, stop or leave your vehicle within 20 metres on the approach or 10 metres on the departure side of any public bus stop.

This is to allow sufficient space for a bus to enter and exit the bus stop safely and pull up to the kerb. This is especially important if the ramp needs to be used for people in wheelchairs, elderly people or others who require this service. 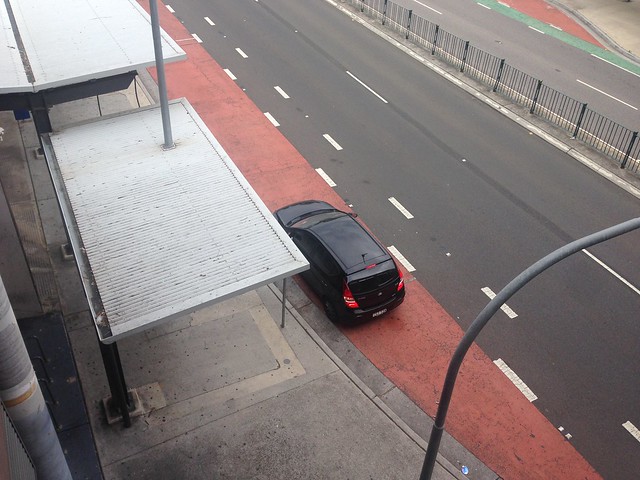 As noted above, there may be parking or other regulatory signs that override this rule. In this case, you can safely park or stop there within the parameters set by any other signage and regulations.

Bonus rule: don’t park, stop or leave your vehicle in a bus zone unless you are driving a public bus. This does not include coaches, taxis, rideshare vehicles, etc.

As a sidenote, as of last year, taxis and rideshare vehicles are allowed to stop in a bus lane if picking up or dropping off passengers, but this does not apply to bus zones.

Hi Philip, this is a very interesting post and yes some of those rules are often mistaken.
I have a major concern with item No.3 and would argue that it is not simple at all.
The issue of left turning vehicles endangering the lives of cyclists is quite a well known phenomenon. In the US a lot has been written in cycling forums and cycling books about ‘RIght turning’ vehicles who have run over and endangered the lives of cyclists. (Naturally in the US the Right translates as Left for us)

This rule is not logical or safe. A cyclist traveling in the same direction as traffic cannot always be aware of cars approaching from behind. What invariably happens is drivers will often turn directly into the path of cyclists. It is absurd to think that a vehicle (bicycle) traveling straight along a major road should have to give way to turning traffic. For this to be safe cyclists would have to stop and look over their shoulder every time a road appears to their left.

Surely for safety’s sake and for the sake of better traffic flow, vehicles should be expected to slow down and let cyclists continue through before turning left.
I have had several near misses when cars have accelerated past me only turned left just a few meters ahead causing me to slam on my breaks to avoid a colission. Often it has appeared that they have not known what to do so rather than wait they tried to turn ahead of me… Drivers will literally turn directly into the path of a bicycle in order to beat them to the intersection. I have had several near misses in this way and on a couple of occasions was nearly T-boned. How could I possibly give way to a vehicle that approaches at speed from behind me and then turns left directly in front of me?
I would like to see the rationale behind this law… and/or your take on the practicality or safety of such a law.

Philipreply
– In reply to: David F

Hi, thanks for your comment. I was referring to this section of the road rules website here: “Cyclists must not ride on the left side of a vehicle that is indicating to the left and turning left at an intersection”.
I’ve had a bit more of a read about this and I think there’s enough ambiguity for this not to be as simple as I originally thought, so in hindsight I’ll take this one off the list: https://cyclinggeelong.com.au/2016/05/26/turning-left-who-has-right-of-way/
Thanks for bringing it to my attention

You’re probably off the mark on No:3, some authoritative references would be needed for such a wide claim. Overtaking is a narrowly defined action if you check the Dictionary in the victorian road rules:

Its this sort of trivial distillation down to “cyclists must give way to left turning vehicles” that causes drivers to shout and scream they are in the right when they are the ones causing the danger and breaking the (complex) road rules.

Philipreply
– In reply to: meltdblog

Hi, thanks for your comment. I was referring to this section of the road rules website here: “Cyclists must not ride on the left side of a vehicle that is indicating to the left and turning left at an intersection”.
I’ve had a bit more of a read about this and I think there’s enough ambiguity for this not to be as simple as I originally thought, so in hindsight I’ll take this one off the list: https://cyclinggeelong.com.au/2016/05/26/turning-left-who-has-right-of-way/
Thanks for bringing it to my attention