I don’t really like to use this blog for personal gripes. But every once in a while, something happens that brings me rushing back to my WordPress dashboard.

A few weeks ago I had reason to head up the Hurstbridge Line on a social visit. I arrived at Jolimont Station to catch the 5:15pm Eltham train.

After waiting for about 20 minutes, I noticed that the platform screen had been showing the next train arriving “in 2 minutes” for a lot longer than just 2 minutes. It then suddenly disappeared without explanation.

There was no information about anything abnormal at the station. In the absence of this, I called PTV to see what was happening. The operator told me that the 5:15pm train would be arriving in 10 minutes or so and everything was fine. I asked her to double check because I hadn’t seen a train in a while, but she assured me that trains were running – it was just a bit late.

Immediately after finishing the call, I checked the Metro Trains Twitter account which, funnily enough, had just tweeted that a truck had hit the rail bridge on Elizabeth Street in North Richmond.

Some Authorised Officers (AOs) had arrived on the platform for unrelated reasons, so I decided to ask them what was going on. They told me that trains were still running. Then one of them got a call saying that all trains on the Mernda/Hurstbridge Line were suspended and that it would be at least 40-50 minutes before an engineer could be brought out to inspect the bridge.

At this point there were no Metro Trains staff that I could see, nothing showing on information screens and only one muffled announcement that I apparently missed because the only speaker on Platform 2 is located directly above its main entrance and I was standing a bit further down.

The AOs advised me to find another way to continue my journey, which definitely seemed like a good idea given the 40-50 minute timeframe.

So what other way was there?

There is a stop for the Route 246 bus on Punt Road nearby. It’s about a 5-6 minute walk away. This bus runs parallel to the railway up to Clifton Hill. But I only just happen to know this because I’m a gunzel and a transport planner. There was no guidance from any official source, other than the Metro Trains Twitter account advising people to catch the Route 12 or 109 trams. This is useful if you’re trying to get to North Richmond from the CBD, but not for getting anywhere else along the Mernda/Hurstbridge Lines.

I hopped on the 246 within a few minutes of arriving at the stop – which was luckily running late due to traffic. The journey north was fine. But what I saw at each bus stop outside the stations as we continued north was an increasing number of people waiting. About 20 people boarded at West and North Richmond, looking for an alternative route. Many of the other people at the bus stop were waiting for taxis, rideshare or other transport.

As with my experience, none of the people who boarded had received any information on how to get to their destination. Overhearing this, I helped them out with their journey planning – asking them where they were going and offering suggestions. For example, a woman with her son and another couple were looking to get to Northcote near Dennis Station. I suggested the 246 to Clifton Hill Interchange and change to the Route 250 or 251 bus up Victoria Road. Another woman who boarded at Victoria Park wanted to get to the city – I suggested that she catch the 86 tram.

But the true scale of the disruption wasn’t truly apparent until we approached Clifton Hill Station. The scene that greeted us as we passed by was crowds of hundreds of people on both sides of Hoddle Street waiting for taxis, rideshare, buses or whatever other alternative transport they could find. It was quite an incredible sight.

Of course, this was all exacerbated by the fact that there was a major cricket match being held at the MCG, with many patrons trying to get there by train. I can’t imagine that this experience would make many of them want to try public transport again next time.

By this time, I was on the phone again to PTV to ask whether or not trains were running beyond Clifton Hill. If they were, I could get off the bus earlier to continue my journey. By this time, we were well into 30+ minutes of the disruption. There was no information on the PTV app or website and there had been no further updates or information on social media.

The operator who took my call was very nice and tried her best to be helpful. But when I asked for this information, she told me that she wasn’t aware of any disruption. Her information showed a “good service” running on the Mernda/Hurstbridge Lines with no suspensions or delays. As a result, despite her best efforts, she was unable to help me. She offered to put me through to another area to put in a complaint, but this didn’t work properly and I was cut off. Again, not a great passenger experience.

In the end trains began running again after about 30-35 minutes – with delays – and services began to slowly return to normal.

The ways to fix it

Disruptions happen. Things break. I entirely understand that. There are always things beyond the control of transport authorities and operators.

But what is within their control is how disruptions are managed.

The first, and easiest, thing to fix is providing information to passengers.

Throughout this entire period, I never saw any disruption information on station platform screens. Departure times for the next train continued to count down but trains never arrived. The single announcement of which I was aware reached only some people on platforms, as the range and placement of speakers meant that you could only hear it if you were standing directly underneath them. As a result, only about two of the 25 people waiting at Jolimont actually heard anything.

When I was on the 246 bus, the 20 or so people who I helped out only received that information because I happened to be there. If I wasn’t there, who knows when or if these people would have found a way, or if they would have just given up and waited for a taxi or rideshare to pick them up. This could have been easily avoided with clear and timely information provided by PTV/Metro Trains. This could have been in the form of platform announcements, station staff talking to passengers (where available), social media and on the PTV website/app.

If anyone from PTV or Metro Trains is reading, here is another easy idea for you.

Let’s have some prepared alternative transport information that is ready to go when disruptions happen. As there are only some places where trains can operate in sections, it would be easy to identify these options for each one. Then there could be some documentation that is ready to be published by station staff and through announcements, as well as on the PTV website, app and social media channels immediately when a disruption happens in one of these sections. This saves staff scrambling around trying to find this and significantly reduces the likelihood that incorrect or impractical information is published.

This can also be used to have permanent posters with specific information. I’ve done a quick example below of what an improvement could look like in the form of posters at a station (which would be displayed in addition to the station maps, not as a substitute).

Compare this to the new maps and disruption information boards that have been recently installed below. 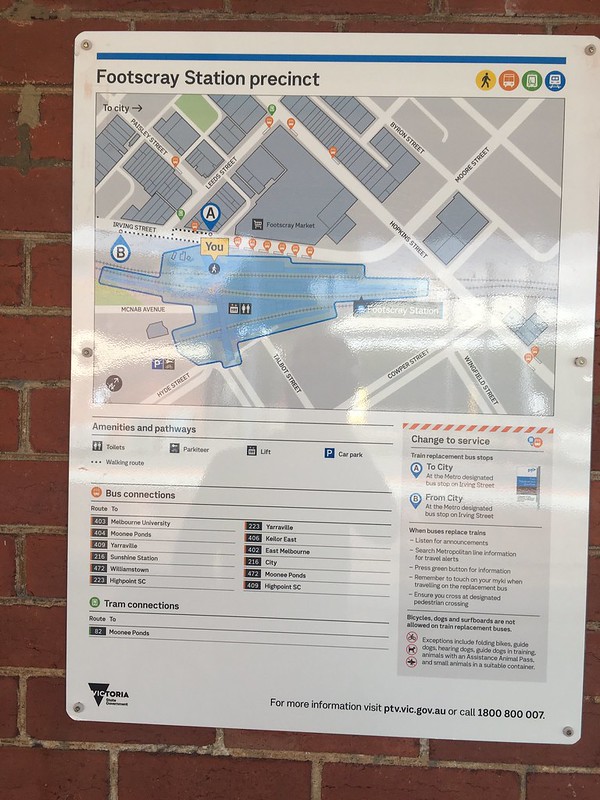 Leaving aside the issues with the maps which I will leave for a separate post, see the small box in the bottom right hand corner euphemistically titled “Changes to your service”.

This is a great illustration of one of the key issues. There is nothing here on how someone might find an alternative route on regular public transport. Even in a place like Footscray which has many feasible options, the only real information is for the location of train replacement buses. This may not be applicable in many situations (such as my example above) or even the best option for passengers.

While it is certainly an improvement from the older style maps which usually just ignored regular buses entirely, these newer ones frankly don’t do much better. There are some better examples – such as at Reservoir – but these appear to be bespoke and not included at most stations. Plus, again, they aren’t very useful for helping people find alternative routes.

As I said before, it is not unusual for things to disrupt public transport. In fact, we know with certainty that it will happen. When and where is another matter, but we can still get ready. For example, having pre-prepared content with alternative transport options for sections of each railway line that can be immediately shared would be incredibly useful. Not only would it be much quicker to get this information to passengers, but it eliminates or greatly reduces the possibility of publishing vague, incomplete or impractical advice (as has happened an unfortunate number of times in the past).

Postscript: after writing this post I noticed a good example from PTV and Yarra Trams that illustrates part of my point. On this page describing disruptions to St Kilda Road trams, there is a comprehensive list of “Alternative travel” with train and bus routes. Leaving aside the page layout which is another story entirely, this is great to see and should be done for every disruption.

Without doubt there were many staff at screens trying to sort out the problem and understand what was happening. They need to pass on critical information to a central very experienced person who has the authority to instruct those who publish platform and PTV information very quickly, along with informing platform staff etc. Every day I hear ‘refer to the PTV website for further information’ but clearly the PTV website is not up to speed. It was no help to me as two St Kilda Road tram replacement buses passed me by as they were already full. It would be nice to not need alternative travel information at stations, but it is not a bad idea.